Originally it wore rubber bumpers and an R. Registration.

It was converted to 1974 specification and resprayed in original factory black over last winter and given a 1974 number plate to complete the illusion.

Standard power output is only 137 BHP but V8,s are all about torque and this has more than enough  to burble around all day in top gear or rip up some tarmac if you want to.

A recent addition is a set of Scimitar Dunlop composite wheels  which look just like the original MG items but with a wider offset which give the car a more aggressive look. 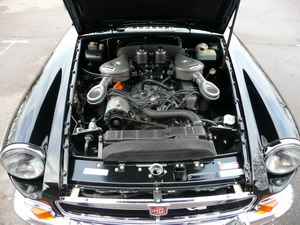